Ninja Showdown (1986) may not be one of the most talked about films in IFD’s canon, and it’s by no means the craziest, but it fits in nicely as one of the most watchable and (in its way) subdued. Joseph Lai is credited as director with Godfrey Ho providing the “screenplay” but the majority of the footage is spliced in from Chu Yen-Ping’s romantic drama Brother Of The Fields (1983). You might think that taking a bleak tale of doomed love between Taiwanese peasants and cutting it together with brightly coloured ninjas duffing each up and yelling about mystical swords is a disastrous idea but YOU’D BE WRONG. Somehow, this appeals directly to my two great loves – melodrama and ninjing – which is something few other films do. 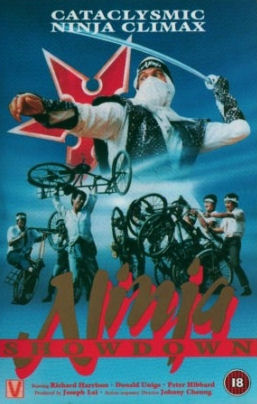 First of all, let’s talk about the brilliant artwork for the UK VHS release (on the Videoline label). They’ve not only used pretty colours and a pilfered Kawasaki logo to make it seem like a much glossier, more action-packed film than it is but they’ve added probably the most incredible, blunt-force tagline I’ve ever read – “CATACLYSMIC NINJA CLIMAX“. Flip it over and they even attempt to summarise the convoluted plot, claiming it to be a “double-edged thriller”; the most diplomatic way I’ve ever heard to describe an IFD cut-and-paste movie. Good work all round. (Collectors take note though : there are some minor shuriken scenes and a little bit of bloody swordplay cut from this UK print, sadly…) 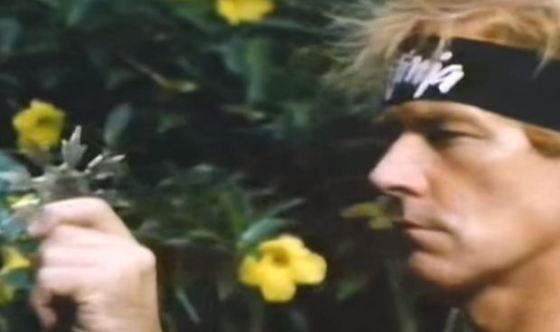 The film itself is set in “The South Village”, a poverty-stricken dive somewhere in Taiwan. The Purple Ninja Empire control the place and extort the peasants with blackmail and violence. Two young kids – Sally and Tony (dubbed by grown adults, which makes it a bit freaky) – dream of one day escaping from this tyranny. Using what little money her parents have saved, Sally is sent off to join the Peking Opera while Tony, uh, goes to get ninja training with Ninja Master Gordon (Richard Harrison reprising his seminal role from multiple IFD movies). 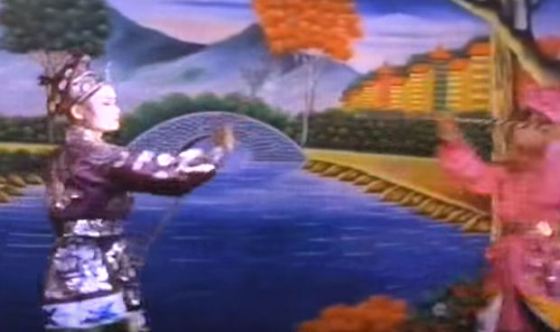 As ever, Gordon has some problems of his own to address though. He sits at the head of the Silver Ninja Empire who are currently in possession of the Ninja Sword Of Justice, an artefact that – while never actually explained – obviously grants its owner tremendous ninja power. Unfortunately, the evil Purple Ninjas have designs on it too and keep killing Gordon’s silver guys. 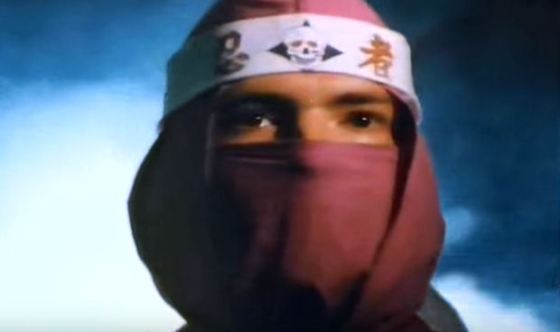 Sixteen years pass in the blink of an eye and those damn ninjas are still after that damn sword. While Gordon sticks around to defend it, Tony, now fully grown, is sent back to The South Village to try and save his friends and family from the ever-growing purple menace. It’s worse than that though. All this time, he has harboured a desperate love for Sally but it’s one that must remain unrequitied. She too has returned to the South Village from the Peking Opera, only to find her father dead and her mother penniless so, as a result, has been sold to local thug Bobby Jing (who’s in league with the purple ninjas)…

Obviously, there are two very separate stories happening here and they don’t always fit together, despite some tremendous effort on Ho and Lai’s part. There’s one wonderful scene, just before “Tony” leaves the ninja academy, where Gordon says “I believe you love music” and presents a gaohu (Chinese violin) to a masked silver ninja. The masked ninja begins playing sweet music for Gordon as it fades gracefully into footage of actual Tony (from Brother Of The Fields) playing a similar instrument back in the South Village. For one, the simple joy of a musical ninja (and Harrison’s blissful, super-serious expression as the melody plays) makes Ninja Showdown essential, but for another, it’s always nice when they make these kinds of sincere attempts to tie the two films together. I also enjoyed the overwrought scene in which child Tony shrieks “I WANT TO BE A NINJA!” at his crying mother. Goodness knows what they were originally saying in this tear-drenched, emotionally charged scene but I suspect it had nothing to do with ninjas.

If I’m honest, the two films are so at odds with one another and clash so astonishingly at times, it’s actively tasteless but there’s so much good stuff in both of them that the enjoyment level never really drops (even if a lot of the ninja scenes are just Harrison, in an array of Hawaiian shirts, shouting “PREPARE TO DIE!” at the camera, then duffing up some random purple ninja – but who couldn’t love this?). Brother Of The Fields was shot the same year that Chu Yen-Ping made the classic Fantasy Mission Force with Jackie Chan and Brigitte Lin and, while it’s not quite in the same league, the production values are strong and the film itself oddly engaging. Plus, it’s so grim and relentless at times that the crass IFD dubbing and cartwheeling purple ninjas are welcome light relief. 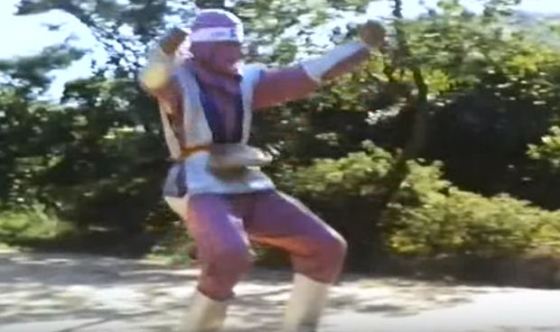 To give you an example of how darkly events play out (spoilers ahead), at one point Bobby rapes Sally while her mother dies of consumption in the next bed. Sally goes crazy and, when Bobby returns to rape her again, she slices her own face up with a knife. Tony finds her bleeding and crying and declares that he loves her no matter what. Tony’s mother – who’s been trying to keep them apart and push Sally towards Bobby – overhears this, realises her mistake and commits suicide by banging her head repeatedly on the stair banister right in front of them. But it’s okay because, moments after this chain of abject horror unfolds, we get Richard Harrison kneeling in a park, wearing a ridiculous outfit and screaming “NIIIIIIIIIIIINJAAAAAAAAAAAAAA!” at the sky for no apparent reason. Yin and Yang, right? 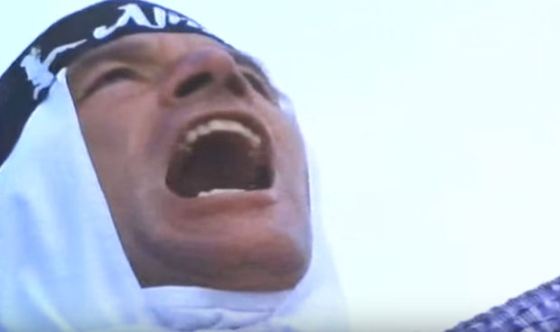 The biggest surprise of all though? There is actually a cataclysmic climax as promised! Brother In The Field comes to a genuinely harrowing end with a machete massacre on pushbikes. It’s gory and tragic and poignant, so quite a relief then when, soaked in (cataclysmic) blood and tears, we cut to Gordon and the Purple Ninja Boss throwing ninja frisbees at each other for a blink-and-you’ll-miss-it final scrap. The whole thing ends with a desultory backflip of victory as “THE END” flashes in violent red across the screen. Draining. 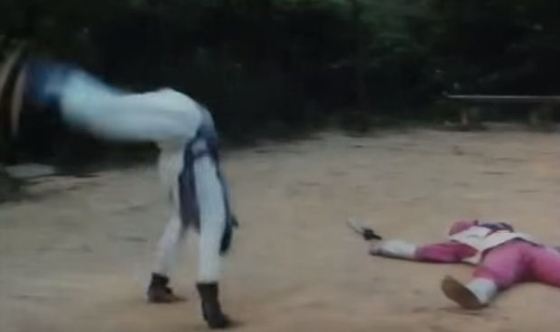 Sure, the ninja action here is a bit rushed and doesn’t feature much elaborate choreography or psychedelic mayhem but we do get some pure IFD gold nonetheless. The dialogue is magnificently strange (aided by the fact that they’ve found some squeaky-voiced nebbish to dub the usually macho Gordon). The part where he barks “Never forget the Ninja Commandment – GOOD MUST ALWAYS WIN OVER EVIL“ is great. I mean, for one, if that’s the COMMANDMENT, why would any ninja ever choose evil? But, for another, it’s a perfect example of why Godfrey Ho’s mind is so special. Who else could come up with something like that? I always feel, with these classic IFD films, that there’s a logic to them as if Ho knew exactly what the overarching story – his perpetual “ninja mission” – was meant to be. Like somehow they all fit together and I’m just yet to figure out how. Still, even if there’s a long way before I achieve total ninja coherence, the bizarre world that Ho created is such a fine, fine place to be. Ninja Showdown may be a bit deep for beginners but advanced ninjologists should get a good kick out of it.

One final thought. This film got me wondering just how many hours of footage Godfrey Ho shot of topless Richard Harrison swinging a sword around? Most of their collaborations have at least one or two scenes like this in them so there’s maybe, what, at least half an hour of it? More? I wonder what was going through Harrison’s head while he did it? I like to think, from his grave expression, that he was totally in the mind of Ninja Master Gordon, safeguarding the sanctity of the Ninja Sword Of Justice with the very fibre of his soul. 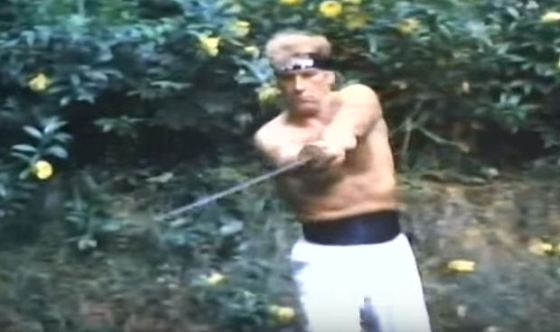